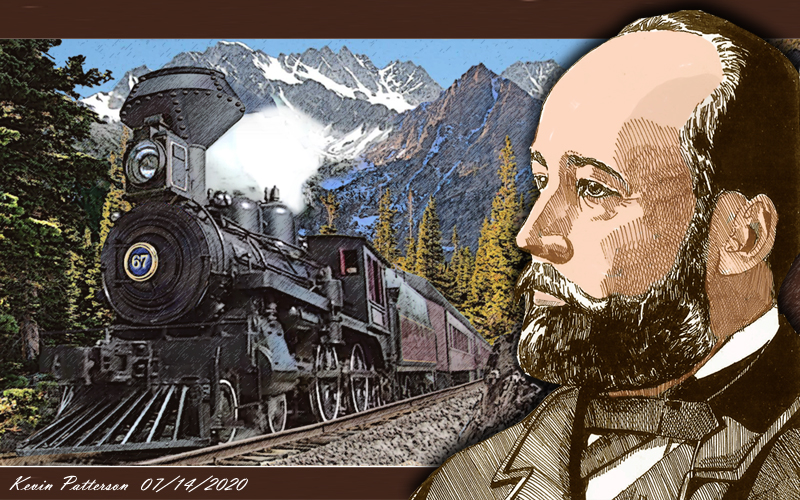 "The biggest things are always the easiest to do because there is no competition."
- William C. Van Horne

He was offered a knighthood three times. In 1890, he was first approached about a knighthood and he refused. It was offered to him again in 1891 and again he would turn down the offer, considering it "inexpedient for the present and (possibly) for several years to come." William Van Horne finally accepted an offer made in 1894 and was officially appointed an Honorary Knight Commander of the Order of St. Michael and St. George (K.C.M.C.). It was only one title amongst a long list of titles Van Horne had amassed over his lifetime.

William Cornelius Van Horne was born on February 3, 1843 in Chelsea, Illinois. During his early years, William would grow up in a prosperous home. His father was the Justice of the Peace for the Chelsea district and then when the family moved to Joliet, his father became Joliet's first mayor. In 1854 tragedy struck the Van Horne family. William's father died of cholera leaving the family with little money and a pile of debts. In order to help his mother feed the family, William took a job carrying telegraph messages.

As he progressed from one job to another, William did not always succeed in impressing his employers. Sometimes his sense of humour and enjoyment of practical jokes would put his employment in serious doubt. Once he ran a ground wire from his employer's office to a steel plate in the railway yards - which could be seen from the office he was working in. The wire being charged with electricity, would shock anyone who stepped on it. This was an amusing spectacle for William until his boss stepped on the plate and unlike William's other victims knew about electricity. William was given a serious reprimand for his actions and shown the door. That setback would not end his employment with railways. In fact he was back working with telegraphs in 1858. He sent reports over the telegraph wires of the famous debates between Lincoln and Douglas on the question of slavery. Once while working as a freight checker and messenger Van Horne noticed the railway superintendent arrive in the railyard on his own private car. This made an impression on the young Van Horne. At that moment he decided to direct his immense energies toward becoming a railway superintendent.

23 years later (1881) found William Van Horne stepping off the train to take up his new position as General Manager of the Canadian Pacific Railway. He gave his full energies to this new position, as he had done many times before. Despite construction obstacles - including the Canadian Shield, Canadian Rockies, the Fraser Canyon, political problems with the government in Ottawa, labour difficulties and the CPR being on the brink of financial ruin several times, the railway was completed in November 1885. By 1888, Van Horne was the President of the CPR. Despite being born a U.S. citizen, William Cornelius Van Horne had become a leading figure in Canadian history