The Italian explorer Giovanni Cabato – also known as John Cabot – discovered a new continent for England on June 24th 1497. The true origin of John Cabot is unknown. What we do know is Cabot arrived in England from Venice with plans to find a route to Asia. He had already approached the Portuguese and the Spanish governments and was turned down. In May 1497, he sailed from Bristol and after a voyage of about 35 days he landed on the shores of North America. He came back with news of this “New World”, describing the seas surrounding it as teeming with fish. 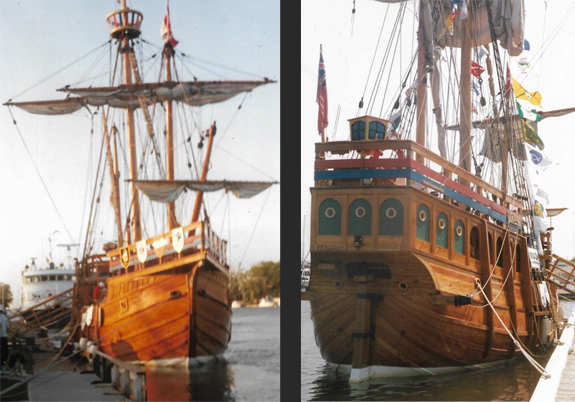 Now move ahead 500 years (1997). Picture yourself in a small ship’s cabin with modern instruments like satellite tracking and a mobile phone. Ok. Now take a better look. Notice that the construction is of a style centuries past. It seems like a small craft making it’s way in the huge expanse of the Atlantic Ocean. This is a replica of the Matthew and her purpose was to recreate John Cabot’s voyage across the North Atlantic. She was given a royal send off by 200,000 people as she progressed down the Avon River and set off on her long voyage. With her hand picked crew, she embarked on a journey that lasted 54 days and was filled with adventures. The Matthew arrived in Bonavista, Newfoundland to be greeted by large crowds, the Queen and Prince Philip. Such a welcome was not accorded to the original Matthew upon it’s arrival. Yet ships like the Matthew brought adventurers, explorers and settlers to the North American continent.

I was privileged to see the Matthew twice on its stops in North America in 1997. The thing I was most impressed by was the fact that these were ordinary people doing something extraordinary. One day I hope she returns to Canada and I can visit this time traveler again.

Return of The Matthew