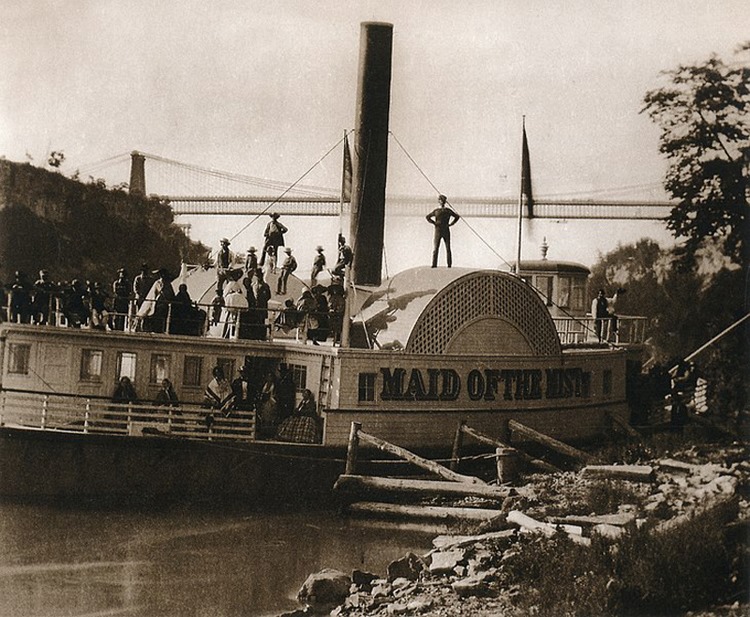 The Niagara River is certainly known for its wild rides and a good soaking. The Maid of the Mist is one of the most famous attractions at Niagara Falls. It gives visitors an up close view of the mighty cataracts.

The first ship to carry the name ‘Maid of the Mist’ was a far cry from what we know today. The original ship was part of a ferry service crossing the Niagara river between the United States and Canada. Launched in 1846, the first Maid was large enough to transport people, luggage, mail, cargo and a stagecoach with horses. While the ferry traffic wasn’t as heavy as the owners had anticipated, the service operated with some success until 1848. The opening of a suspension bridge between the United States and Canada cut into the ferry traffic. At that point the owners decided to change from a ferry service to sight-seeing trips.

The sight-seeing service proved successful and a second larger ‘Maid of the Mist’ was launched July 14th 1854. At 72 feet long, this boat featured a single smoke stack design and a steam propelled paddle wheel. Compared to the first vessel this version was luxurious, designed for sight-seeing and with enough power to negotiate the strong currents at the base of the falls. Captain Joel Robinson would provide his passengers with coats and caps to protect them from the spray as they enjoyed an exciting trip to view the falls up close. This service was in operation for six years. Facing a financial crisis and the onset of the American Civil War, the owner W. O. Buchanan was forced to sell the boat at public auction to a Canadian Company. The deal would go through if the boat could be delivered to Lake Ontario. That would require making a treacherous journey north through the Great Gorge Rapids, the Whirlpool Rapids, and the Lower Rapids before reaching the mouth of the river at Lake Ontario.

At approximately 3 pm on June 6, 1861 Captain Robinson along with his mechanic and engineer set out on a wild ride through one of the world’s most dangerous white water. An audience had gathered along the shore to take in the spectacle. The waves crashed against the Maid of Mist causing the smokestack to be ripped off and flinging the crew to the deck. At one point the ship was traveling at more than 60 km/h propelled along by the seething white water. By the time they arrived at the whirlpool Captain Robinson was able to regain control of his ship. It was a difficult struggle to release his vessel from the iron grip of the whirlpool. Once released, Robinson steered a course north through the lower rapids. A battered Maid of the Mist arrived in Lake Ontario missing it’s smokestack after being ravaged by the powerful river. Captain Robinson and his crew had achieved the impossible, becoming the first people to make this treacherous journey.

The terrifying adventure had taken it’s toll on the boat and it’s captain. Robinson retired never to return to the life and career he loved. He lived two more years dying at age 55.